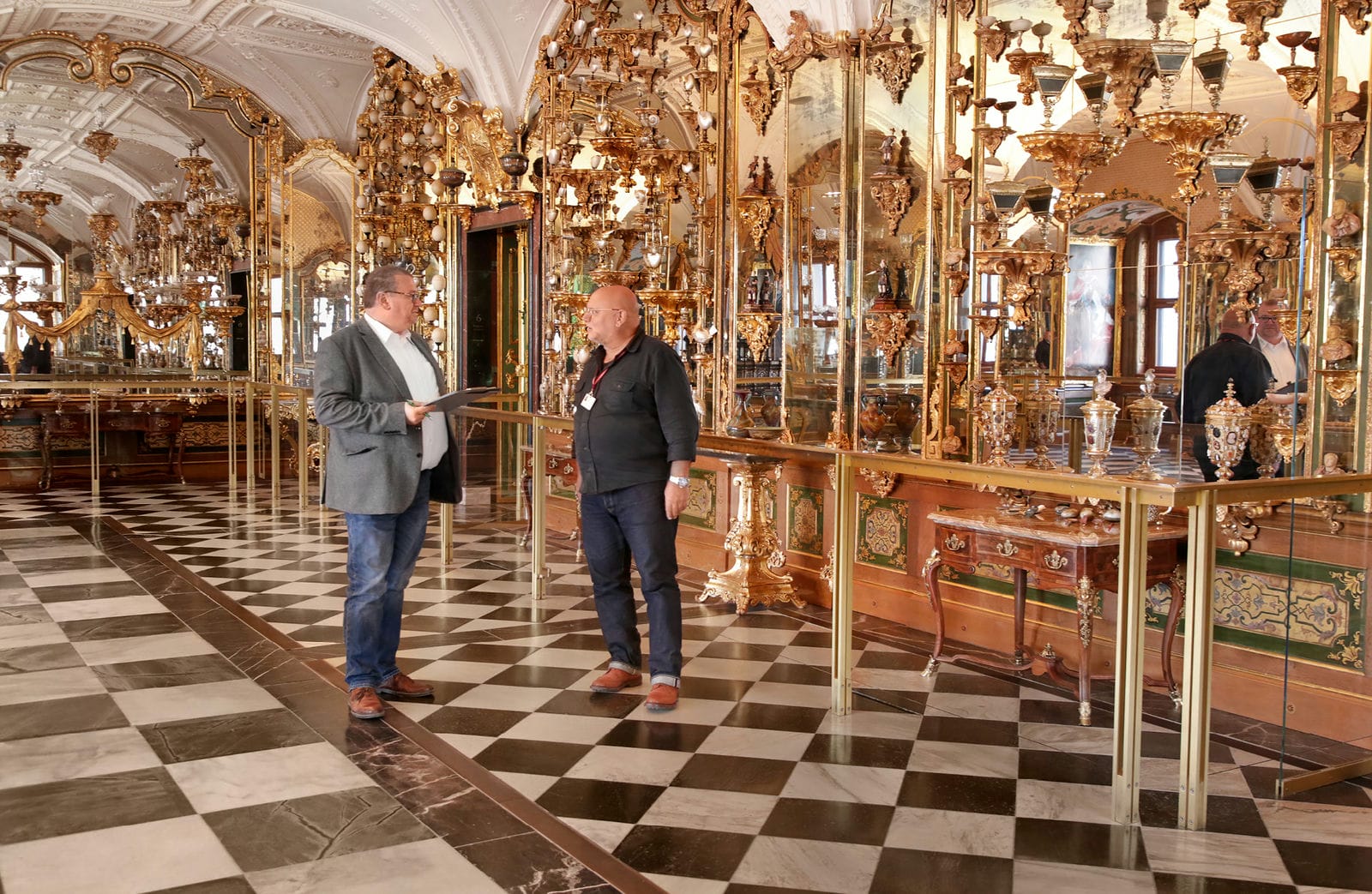 Jewelry, paintings, statues, trophies, rare furniture: In Dresden, one of the most important prince’s courts of modern times, you can now marvel at the collections in the magnificent, reconstructed buildings such as the Zwinger and Royal Palace. But art is fragile and can be easily damaged. DEKRA employee Thomas Knippschild maintains an overview on the big picture when analyzing hazards.

The pictures from 2002, when the Elbe stood 9.40 meters high after continuous rain, are still present to many. Among other things, they show the completely flooded Zwinger courtyard. Many works of art, including six large-format paintings and 17 pictures on painting drums as well as 300 historical wooden frames, could not be rescued from the underground storage during an emergency removal, partly because of their size. They subsequently had to be restored at great expense or were destroyed. The Dresden State Art Collections (SKD) reported 28 million euros in damage to the Saxon State Ministry after the flood. The merciless water had not only launched on attack for the art collections and threatened the most valuable, but also destroyed buildings and technology.

Risks and dangers in the museum

“A pretty good opportunity to think about a well-functioning flood management and a comprehensive hazard analysis,” sums up Michael John, Head of Building Management at the SKD, who’s responsible for the safe operation of 15 museums and five collections. In view of the floods, it was clear that something had to be done in the way the risks to which some 4,650 pictures and around 11,000 sculptures in Dresden were considered: Like water, fire, storms or even theft pose existential threats to the collections. But even improper storage and transport, insufficient or excessive moisture in the air, pests and pollutants brought in by people – visitors, restorers, guards, and supervisory staff – represent also potential threats for art.

Thomas Knippschild (47) from DEKRA’s People and Health department constantly keeps an eye on all these dangers, because he has been specially engaged by SKD as a risk management specialist for this purpose. It all started in 2004, when his then department head at the DEKRA’s Erfurt branch asked him if he would like to take on a “rather unusual job” in Dresden. The task was to develop a flooding management plan following the flooding catastrophe of the previous year. He agreed and now says, “It was the best decision of my life.” Over the years, that one project has developed into a portfolio ranging from risk analysis to occupational health and safety for employees. On behalf of the SKD, Knippschild manages almost all of its properties, including the Semperoper, the Dresden Royal Palace, the Saxon House of Estates and Pillnitz Palace. In addition, his expertise is in demand as an author and speaker at the Conference of National Cultural Institutions (KNK). Michael John claims: “In Dresden and far beyond, nothing would be possible without Thomas Knippschild’s expertise,” says Michael John. “He has developed his very own ‘wealth of experience’ over the years.”

From hazard analysis to action plan

But how exactly does the DEKRA employee come into play? Knippschild is not an expert in works of art or their restoration. “My job is essentially to work with a whole team of experts and compile the acquired information, indications, and data obtained into a hazard analysis and later into an action plan,” says Knippschild.

A good example is the flooding emergency plan, which stipulates what is to be done in a worst-case scenario and by whom. At the suggestion of Thomas Knippschild, there are layout floor plans for all exhibition rooms. In the handy A5 format, small images even represent the individual works of art. This means that even external emergency from outside the company, for example from the fire department, can see at a glance what needs to be done. “It’s always the same questions when it comes to evacuations,” says Knippschild. “Which works of art are the most valuable and should therefore be removed first from the walls or pedestals? Which ones are easy for one person to be transported, and which large-format works require multiple people? Then where do the paintings and handcrafted sculptures go? And so on and so forth. “Because when the water levels rise, things have to move fast.”

The acute evacuation plans are, of course, accompanied by preventive structural measures, which are now organized in the emergency network. Everything together works so well that Dresden today has its flooding under control. Thanks also to the plans by Thomas Knippschild’s and the measures undertaken, the second wave of flooding of the 21st century in 2013, with a level of 8.78 meters, did not cause nearly as much damage as it did in 2002. The Zwinger’s courtyard remained dry in any case. Another measure: The storage facilities for the works of art have since been relocated to above ground.

Not only art is risked by dangers from water, fire or UV radiation, but the objects themselves can also be dangerous. Take, for instance, the poisonous chemicals that earlier generations – with good intentions – used to protect against pesticides. Among other things, wooden objects were protected from beetles. But today, these chemicals can pose health hazard to museum staff, if the residue is inhaled or absorbed through their skin. Thomas Knippschild also has to keep in mind this issue at the SKD. Working with the DEKRA lab in Halle, the expert conducted a large-scale study of many collectibles on behalf of the SKD in order to assess the level of danger and develop corresponding measures from it. Since then, extractor hoods, protective gloves, lab clothing and other measures have been required at certain workstations in the SKD’s restoration workshops.

My job is essentially to work with a whole team of experts and compile the acquired information, indications, and data obtained into a hazard analysis and later into an action plan.
Thomas Knippschild, Product Manager Occupational Health and Safety